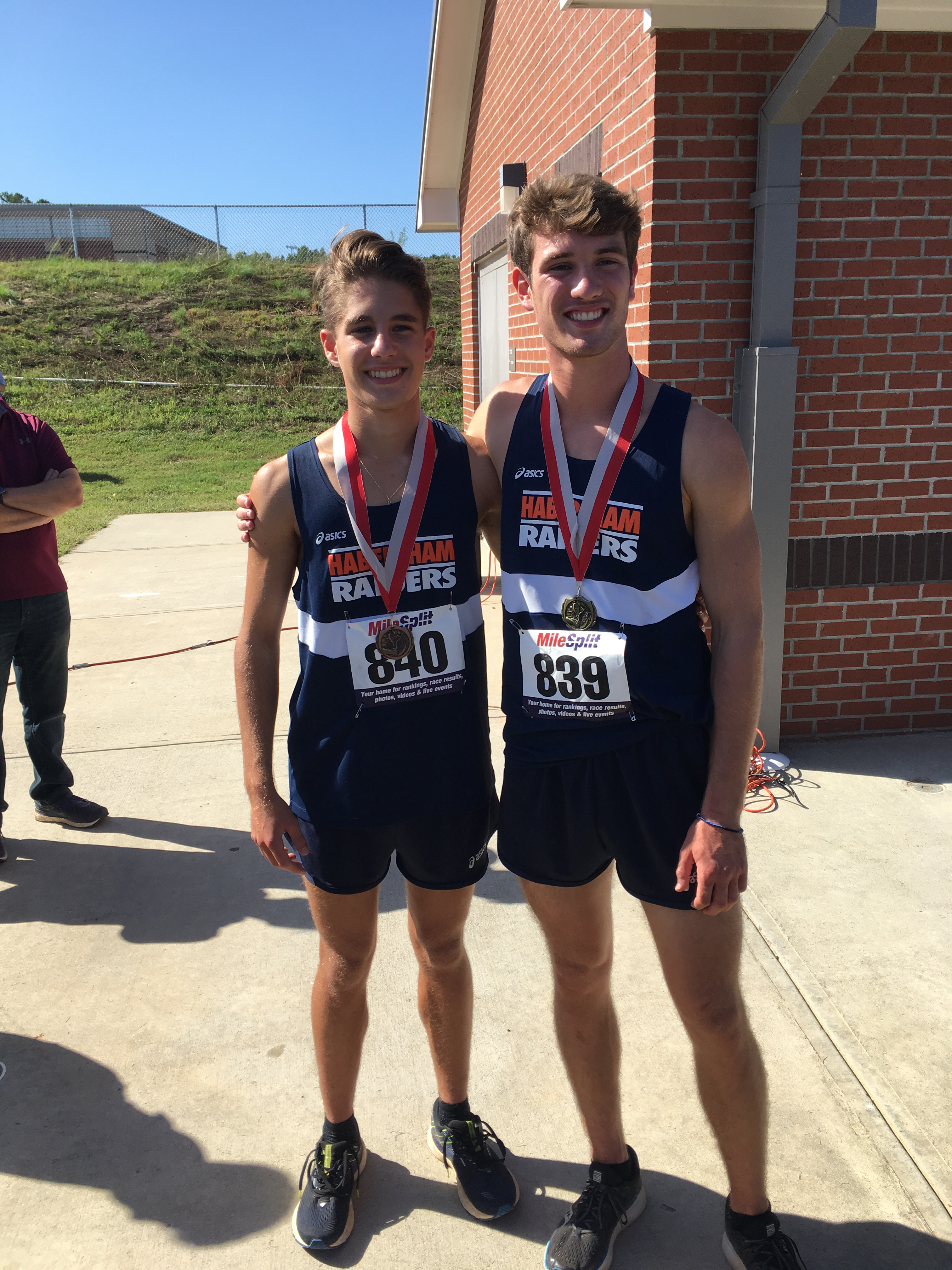 You could call Habersham Central High School (HCHS) students Thomas Hotard and Andrew Kivett a lot of things – competitors, teammates, runners – but perhaps the best way to describe the pair of cross-country captains would be friends, as their love of the sport has forged a friendship that has helped both boys and their team reach their goals.

Hotard, a senior, began running cross-country in the sixth grade.

“At first, I was doing it because a bunch of my friends were going it,” he said. “It was something we could all go together and enjoy.”

After starting the sport as more of a social activity, Hotard began realizing just how good he was at it. From there, his interest grew more serious.

Unlike Hotard, Kivett’s venture into the world of competitive running came later.

“Ninth grade was actually my first cross-country season ever,” Kivett said. “I had always been into soccer and then in ninth grade, my brother, Edward, wanted me to try it out and I decided to get into the sport. Then I found that I really enjoyed it.”

Kivett said he found enjoyment in running because it wasn’t a sport for the simple-minded.

“You really have to be strong mentally in this sport,” he said. “It’s not easy to just go out there and run every day and bring your all. It really takes some mental toughness and the desire to be good at the sport. Wanting to be good breeds success in the sport.”

As the years have gone by, Hotard and Kivett’s friendship has grown, thanks in part to their will to push each other.

“When we started running together, we both had goals we wanted to accomplish and goals for the team,” Hotard said. “I think running together helped, especially this year, because [Andrew] was a captain with me.”

Over the summer, the pair worked out together and trained for the 2019 season.

“Last year, we didn’t meet our goals that we had desired to accomplish and with that not happening, we got together this summer and tried to run as much as possible,” Kivett said, adding the two pushed each other. “If there was a day one of us didn’t feel like running, the other one would push us to get after it and get out there and run.”

Before a practice in the beginning of the season, HCHS Head Cross-Country Coach Nikki English gave each runner a blank sheet of paper and asked them to write down their goals for the season.

Kivett listed the same goal, but with added reasoning.

“Right before the season, I had some screws taken out of my ankle from an earlier injury I had my freshman year,” he said. “I really wanted this to be a ‘get back on my feet’ season and just be the runner I’ve always wanted to be.”

The injury Kivett sustained occurred right before the region championship race in 2017, causing him to miss the race. After failing to place in the top four, the team didn’t qualify for state.

This season, both boys’ goals were met, both individually and as a team. Hotard broke the school record of 16:30 in a meet against Winder-Barrow High School, then broke his own record by recording a 16:06 at the Alexander/Asics Invitational Oct. 5.

“I was pretty happy that I set the record,” Hotard said, adding another of his goals was also met. “I wanted to medal in every single race, which I thought was impossible, but I actually somehow did.”

Kivett earned top-15 placements in four races this season, too. Including at the region meet.

“I ran a 17:16 at the region meet, which is my personal record (PR),” Kivett said. “Getting sixth place was huge for the team and I was able to qualify individually for state. That was really an awesome race.”

With Kivett’s sixth-place finish and Hotard’s second-place finish, the Raiders placed fourth as a team and advanced to the state tournament, a feat that seemed almost impossible to many.

“If you asked anyone in our region if they thought that Habersham Central would have placed in our region and gone to state, I guarantee you everyone would have said no,” Hotard said. “Everyone on the team showed up and did their best to lead us to our finish at state.”

Hotard went on to place fifth at the state meet in Carrollton, while Kivett wasn’t far behind with a 41st-place finish.

For English, both boys made this season one to never forget.

“Thomas had an exceptional senior year,” she said. “He led the varsity boys’ team well. I’m so proud of all that he accomplished this season. Like, Thomas, Andrew put in serious work this season. Before the season began, he had surgery to remove screws from his ankle and weeks later was already running on it – months later, he was setting new PRs! I’m amazed at the resilience and determination that I saw from Andrew this year.”

With the season now behind them, both boys are setting their sights on the future. For Hotard, that includes racing in the Georgia High School XC Meet of Champions, which he was invited to for his performance at the state meet. The race will take place in Fayetteville Nov. 16.

Kivett has already begun planning for next season, when he hopes to break Hotard’s school record.

“I’m definitely setting high expectations for my running next year,” he said. “I haven’t really had a full summer of training since high school began, so this summer, I’m really hoping that I can have a successful summer of training without injury and do good things individually and for the school that will help me be the best I can be.”

“I wanted to make it as hard as possible for him to beat it,” he said.

Hotard added the sport has forged a strong friendship between the pair.

“I think cross-country has definitely helped our friendship, because now we’re very close and we look out for each other,” he said. “We know each other’s goals and have pushed each other to reach them.”

Both boys will run track in the spring before Hotard graduates. After graduation, Hotard said his goal is to try to walk on to the cross-country team at the University of Georgia.

Next season, it’ll be up to Kivett to lead the Raiders back to where they want to be, and with the determination to follow the path set by his friend, he’s sure to do just that.