While it was just a scrimmage and the result doesn’t count on their record, the Habersham Central High School (HCHS) Raiders started their season off with a bang Monday night, taking down the visiting East Hall High School (EHHS) Vikings 52-51 in front of an energetic crowd in Mt. Airy.

“I’m just so proud of those kids,” said HCHS Head Basketball Coach Cody Anderson, who made his return to the same court he played his high school games on for the first time as the Raiders’ head coach. “It was pretty special. Obviously, for me too.”

The Vikings won the opening tip-off and controlled the pace of the game for most of the first half, taking a 10-8 lead in the first quarter and stretching it to 33-22 at halftime.

During the break, Anderson told the Raiders to do what they do.

“I told them at halftime that when we do what we do, we have success,” he said. “When you do what you want to do, we don’t. For them to realize that was really good.”

The Raiders responded to Anderson’s words going on a 16-9 run in the third quarter to cut the deficit to 42-38, then continued their hot-shooting and dominant defense in the  fourth quarter as they outscored the Vikings 14-9 to win by one. 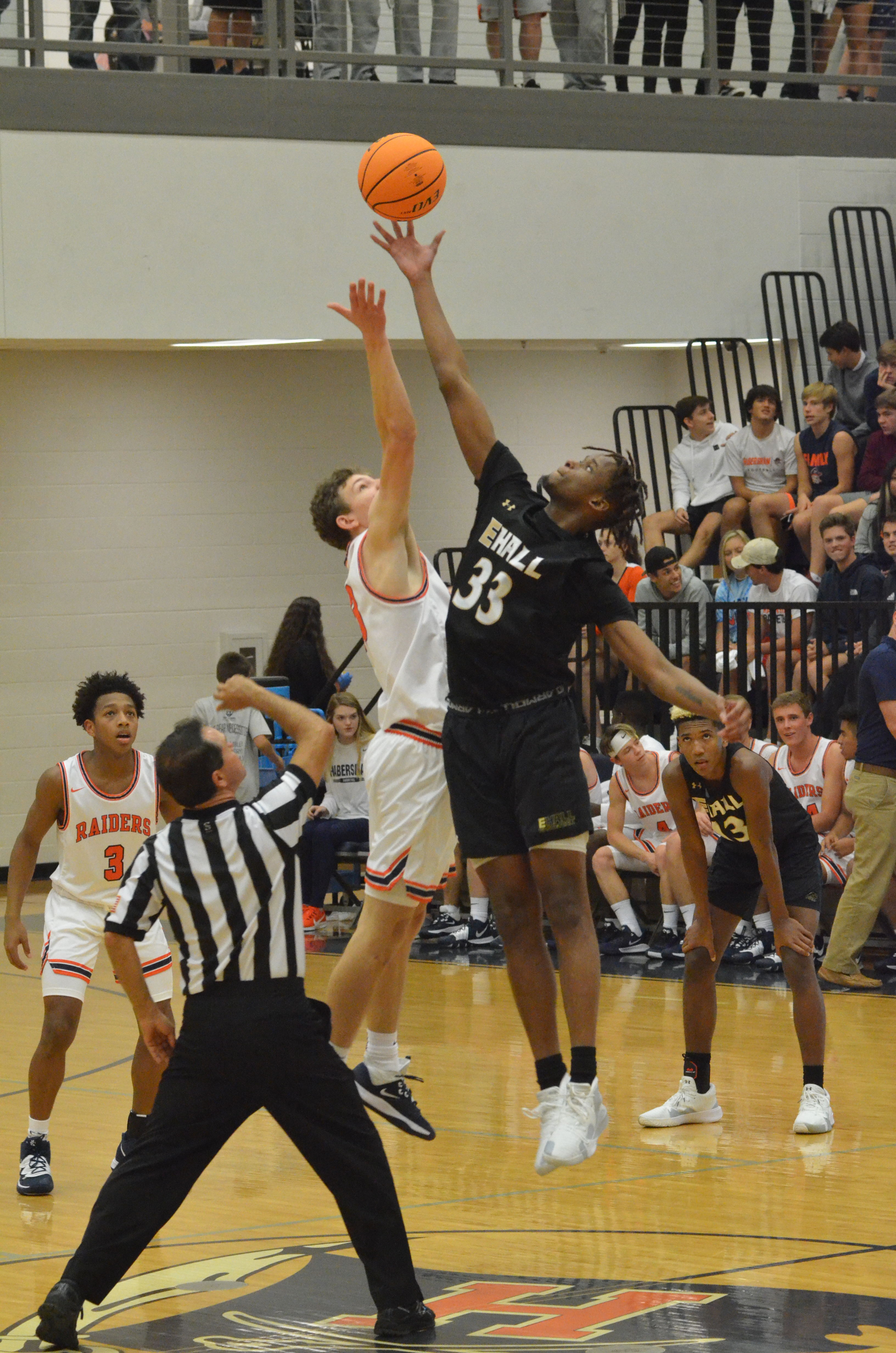 Although the game was just a scrimmage, the victory provided morale all the same.

“I’m so glad they got to experience some success, because they haven’t gotten to experience a lot of that,” Anderson said, adding the large crowd only added to the excitement of the win. “We had an unbelievable crowd. I was told that’s the most students that have been at a basketball game in five years. For them to see that and for us to have some success was huge.”

The Raiders outscored the Vikings in the paint 26-20, had 13 assists to EHHS’s 11 and did something better than they’ve done in a long time – handled the pressure.

“We’ve been plagued by pressure … since the days when I was playing here,” Anderson said. “Teams are going to pressure Habersham.”

Anderson added most of the time when pressed, the battle is lost between the ears before it’s lost in the game.

“It’s something we’re going to face every single game, so we’ve worked on it since day one,” he said. “We did a great job against their pressure. Were we perfect? Absolutely not, but we had 15 turnovers for the game. I don’t think [we] had a game last season with less than 20 turnovers. For us to only have 15 and for East Hall to turn the ball over 21 times … was a big deal for us.”

Micah Ward and Malachi Dooley led the Raiders in scoring with 12 and 11 points, respectively. Other scorers for HCHS included Grayson Adams with eight, Jace Reeder with seven, Jeb Barnette and Jacob Brown with five each and Issac Barnes and Cade Williams with two points each.

The game showed Anderson that he could count on a number of players to provide offense, but also that the team was capable of playing – and winning – close games.

Another situation that the Raiders hadn’t been able to see unfold much before the game was how they’d play with their full squad, as the players who played football this season had only practiced once with the team, but that changed Monday night.

In the second half, Anderson inserted Adams into the lineup and the tone changed completely. Adams finished the game with eight points and seven rebounds – he played just 11 minutes.

Anderson said Adams is the poster child for why kids should play both basketball and football, as the physicality they gain from playing football translates in a big way on the court.

“Josh Pickett does similar things on the basketball court that he does on the field,” Anderson said, adding both Pickett and Gabe Hudlow will be big boosts to the team. “We’ve got to get them integrated.”

“Our challenge is in a short amount of time, how do we keep building our team, while also going backwards a little bit to catch those guys up to speed?” he said. “Depending on how our staff and team can mesh those things together, that’ll probably determine what our early season success will be.”

The Raiders will officially begin the regular season tonight as they go on the road to play Franklin County High School in Carnesville. On Saturday, the Raiders will travel to Commerce for a non-region game against East Jackson High School. Playing two games in two days isn’t an ideal situation, Anderson said.

“I would have never preferred to play a back-to-back to start the year,” he said. “You want to play those early season games and have time to work on things.”

The Raiders will see styles of play from both teams similar to that of the Vikings.

“Both of these teams will pose different challenges than East Hall, but very similar in the fact that they’re both going to apply pressure and want to score in transition,” Anderson said. “They’re both going to want to turn us over and things like that. Even though they do it in a different method, the theme will still be the same.”

For the Raiders, it’s all about controlling the pace and tempo of the game.

“I want to be the one that dictates both offense and defense,” Anderson said. “We need to continue to grow and get better, but still focus on our identity. That’s what’s going to get us success over the long haul.”