While it wasn’t the way they wanted to end the season, the Habersham Central High School (HCHS) Raiders are sure to remember their season finale against Apalachee High School (AHS) for years to come as the back-and-forth shootout provided multiple lead changes and a flurry of fourth-quarter touchdowns. In the end, though, it was the Wildcats who came out on top as they secured a 56-49 victory in Winder.

“I hated that it ended this way for the seniors,” said HCHS Head Football Coach Benji Harrison. “I wanted us to go out on a win. Unfortunately, we didn’t get that done.”

The game was especially memorable for HCHS senior quarterback Ryte Woodruff, who signed his name next to former Raider greats with his performance. Woodruff accounted for seven total touchdowns in the contest, finishing with 324 yards passing with two touchdowns and 202 yards rushing with five touchdowns. Woodruff’s rushing touchdowns tied him with Kevin Ellison, Cliff Coleman and David Griffin for first all-time in school history, while his points accounted for (30) tied him with Coleman and Ellison for second all-time.

“It’s a great honor having those records,” Woodruff said. “I just wish I would have had a little bit more time, because I’m just now getting rolling. But it’s a great honor getting mentioned with those names – a big honor.”

From the very beginning, the game had “shootout” written all over it.

The Wildcats received the opening kickoff to begin the game and scored on their first play from scrimmage as Shaan Cook ran for a 67-yard touchdown. After a failed extra point try, the Wildcats led 6-0.

The Raiders found early success on the ensuing drive, but lost possession on a fumble. The turnover didn’t hurt the Raiders, though, as AHS was forced to punt.

Shortly before the end of the first quarter, the Raiders recovered a fumble of their own. Austin Wood pried the ball loose and Brannon Soltez recovered to give HCHS momentum going into the second quarter.

A fourth-down conversion on a 27-yard pass from Woodruff to Grayson Taylor helped set up the Raiders first touchdown of the game, which came moments later on a two-yard touchdown run from Woodruff. After Patrick Tedder added the extra point, the Raiders took a 7-6 lead.

The Wildcats were forced to punt on their next possession before the Raiders added to their lead.

Woodruff connected with Joshua Pickett (23 yards) and Jackson Clouatre (13 yards) for big gains through the air and added a 37-yard run that put the Raiders in the red zone. Clouatre gained nine yards on the following play to set up Woodruff for a three-yard touchdown run. Tedder added the extra point to extend the Raiders’ lead to 14-6

AHS cut the lead on the ensuing drive when Tyrik Sims found the end zone on a 41-yard touchdown run. Adrian Lopez added the extra point to make it 14-13.

The Raiders wasted no time snatching momentum back from the Wildcats, though. Woodruff and Pickett connected for the second time of the game on a 57-yard touchdown pass, Tedder added the extra point and the Raiders led 21-13.

An interception near midfield cost the Raiders later in the quarter as it set up the Wildcats with great field position. AHS needed just two plays to find the end zone, with Sims finding pay dirt on a 33-yard touchdown run. Lopez added the extra point and the Wildcats trailed 21-19 going into halftime.

The Raiders received the ball to begin the second half and added to their lead quickly. A 19-yard run by Clouatre and 32-yard pass from Woodruff to Pickett put the Raiders into AHS territory, before Woodruff put the exclamation mark on the drive with a one-yard touchdown run. Tedder added the extra point to give the Raiders a 28-19 lead.

The lead didn’t last long, however.

The Wildcats capped an eight-play, 53-yard drive on the ensuing possession with a seven-yard pass from A.J. Forbing to Cook. Lopez added the extra point to cut HCHS’s lead to 28-26.

The score remained unchanged the remainder of the third quarter, but the back-and-forth battle was about to get even more intense.

Woodruff scored a five-yard touchdown run on the first play of the fourth quarter and Tedder added the extra point to give HCHS a 35-26 lead.

Four plays and 55 yards later, the Wildcats were back within a touchdown. Forbing connected with Hayden Goss for a 31-yard touchdown pass, Lopez added the extra point and AHS trailed 35-33.

The Raiders began their next drive with a heavy dose of Clouatre and Arian Curry, who combined to carry the ball seven straight times for 47 yards to set up HCHS with a second-and-goal opportunity from the three-yard line. A touchdown would have given the Raiders a two-score advantage, but the Wildcats forced a fumble and recovered it at their own four-yard line to eliminate the scoring opportunity.

Two plays later, Cook scored a 91-yard touchdown run to give AHS the lead. Sims then rushed for the two-point conversion to give the Wildcats a 41-35 lead.

Sensing the momentum swing, the Wildcats opted to kick the ball to no man’s land on the ensuing kickoff, which AHS recovered at the Raiders’ 15-yard line. The Raiders’ defense held strong and forced a third-and-eight try, but AHS converted it on a 13-yard touchdown run from Cook. Lopez added the extra point to give the Wildcats a 48-35 lead.

Down, but not out, the Raiders kept fighting.

Woodruff connected with Grayson Taylor for a 67-yard touchdown pass on the Raiders’ next possession and Tedder added the extra point, cutting the Wildcats’ lead to 48-42.

HCHS tried to get the ball back on the ensuing kickoff, but AHS was able to corral the kick and take possession with great field position. On the third play of the drive, Cook rushed for an 18-yard touchdown. Sims ran for the two-point conversion to give AHS a 56-42 lead.

Down two touchdowns with 1:36 remaining on the clock, the Raiders went into their two-minute offense.

In successive plays, Woodruff connected with Pickett for a 14-yard gain, rushed for 19 yards and completed a pair of passes to Clouatre (four and three yards) to put the Raiders inside the red zone. Woodruff then tossed an incomplete pass to Pickett, rushed for a 14-yard gain and scored a one-yard touchdown with 37 seconds remaining. Tedder added the extra point to cut the lead to 56-49.

Tedder tried an onside kick following the touchdown, but the Wildcats were able to recover it and run out the clock.

Try as they might, the Raiders came up just short of a miracle comeback. For Harrison, it all started with the fumble in the fourth quarter.

“That was a big moment right there that should have ended the game, and we didn’t,” he said. “We go in there and score, this ballgame is over. Unfortunately, we made a mistake and didn’t do that.”

Harrison said the mistake on the kickoff that recovered by AHS only worsened things.

“When you make mistakes like that and keep giving other teams chances to win when you’re struggling to get some stops, that’s what happens,” he said. “Unfortunately, it happened on our last time together.”

Harrison said he was disappointed for the seniors, who he wanted to go out with a win.

“That last one – win or lose – is always very bittersweet, just because you’re saying goodbye to a group of guys you’ve had with you for four years,” he said. “It’s definitely a tough night on that end.”

On Woodruff’s performance, Harrison said it was the culmination of a great year.

“To come out his senior year and play the way he did consistently all year, I’m super proud of him,” he said. “He’s a competitor and a dang good football player.”

Woodruff said he’ll miss playing with his teammates and taking the field for the Raiders, but most importantly, he’ll miss the support of the community.

“I’m going to miss the community, for sure,” he said. “The community is behind everything that we do. It’s just been a great time.” 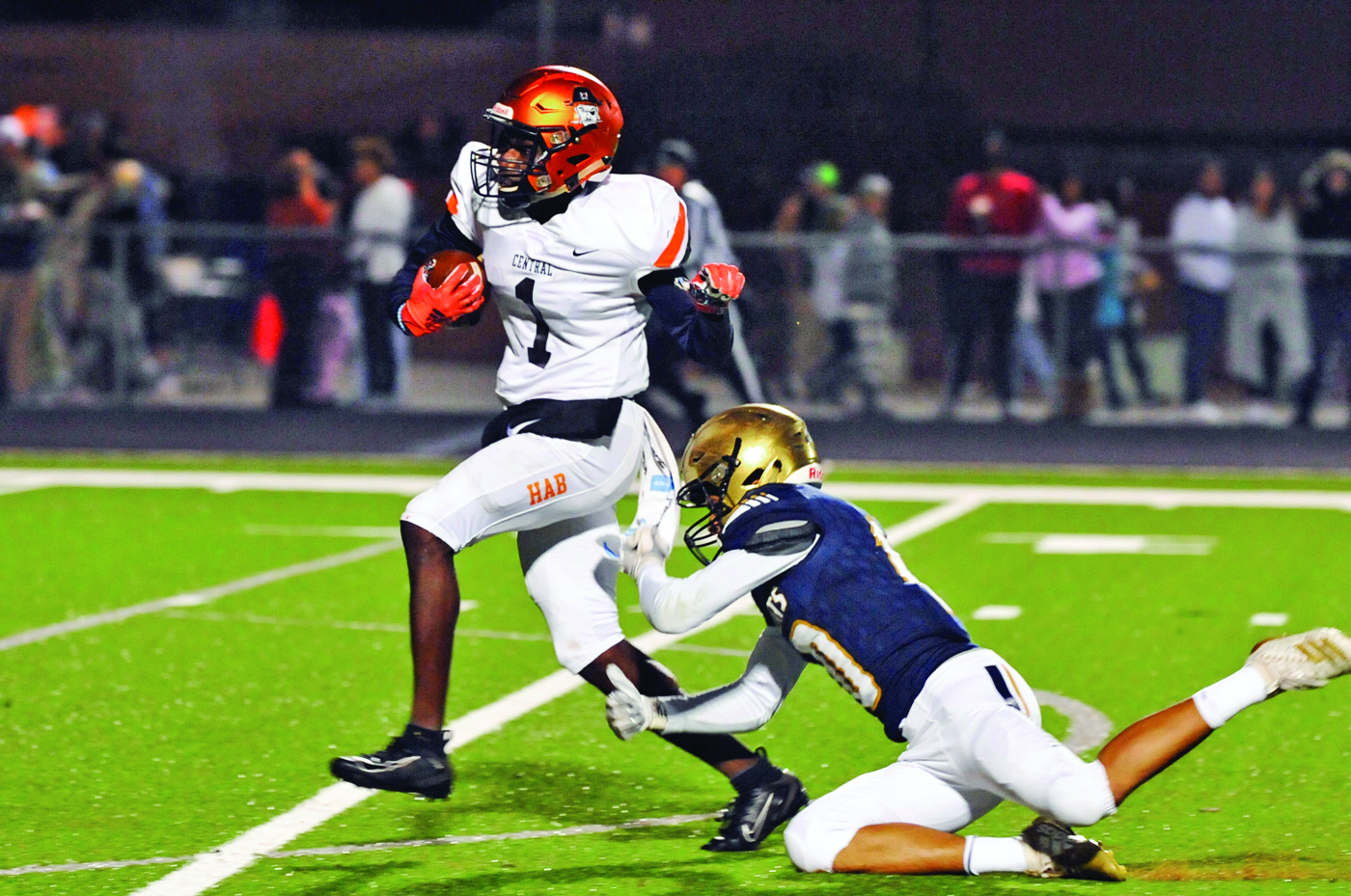 While Woodruff and nine of his fellow seniors have played their last game for the Raiders, Harrison has a large group of underclassmen returning.

“We’ve got a good group coming back – some guys who have played a lot of football,” he said. “A great group of rising seniors that gets after it and will compete at a high level. I’m excited to get back to work with them.”

After taking a few days to close out the year, Harrison said he’ll turn his attention to next season, when the Raiders will look to improve upon the 3-7 record accumulated this season.

“We’ve got a group of guys that I think are hungry, who are upset with how this one ended,” he said. “I think they’ll do everything in the offseason to prevent it from happening again.”